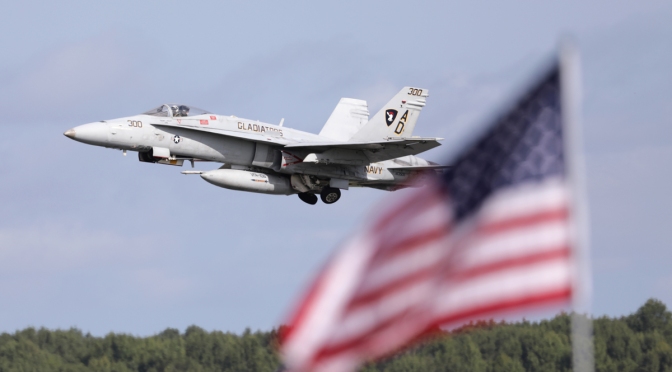 The 2018 NAS Oceana Airshow was held on September 21-23. Friday was open to military family members, and was also an open house for local 5th graders as a STEM laboratory. The event was the largest in several years, and included headline performances by both the US Navy Blue Angels and the RCAF Snowbird jet demonstration teams.

The weather varied all three days, which can be evidenced by the photos. However, flying was able to be completed all three days and provided some wonderful vapor opportunities as well as some nice cloud backdrops. The variety of acts was a good blend of civilian and military performers.

The Aircraft of the Fleet

Bandits! The art of dogfighting with VFC-12 Fighting Omars

NAS Oceana is home to own adversary training squadron VFC-12 Fighting Omars, callsign “Ambush”. The squadron flies F/A-18 Hornets painted to resemble aircraft the fleet pilots may encounter while on deployment. Here, the Hornets are in a “splinter” paint scheme to resemble the Russian SU-35.

The squadron is made up of a combination of active duty and reservists and is tasked with training the fleet pilots in the art of dogfighting. Unlike the fleet ready rooms, this squadron is made up of high time and veteran pilots who have mastered the skills required to best aerial adversaries. Much like the Blue Angels flight demonstration team, the members are hand picked and must be approved by the other members of the squadron. The pilots are selected for their flight skills and personality due to the small size of the squadron and teamwork required to accurately train the fleet pilots.

The pilots are training using tactics of potential adversaries such as Russia and China using some of the oldest aircraft in the Navy.

VFC-12 and VFA-105 Gunfighters demonstrated a vertical 1×1 engagement, as well as a 2×1 horizontal dogfight.

Major Paul “Loco” Lopez provided a stunning demonstration of the USAF’s F-22 Raptor. The jet is considered by many to be the world’s best air superiority fighter. Abilities include “super cruise” (ability to exceed the speed of sound without afterburner), thrust vectoring and stealth. Stealth is achieved by carrying all ordinance internally in three bays. Thrust vectoring provides the aircraft unparalleled maneuverability, even compared to the F-16 and F-15. The jets two Pratt & Whitney F-119 engines provide 35,000 of thrust each, and in afterburner provide ample “freedom thunder!!”

The Gladiators from VFA-106 flew the last F/A-18C Hornet demo while at their homebase of NAS Oceana. The squadron serves as the fleets F/A-18 training squadron and also provides the aircraft and crew for the Legacy Hornet Demo Team. The Hornet has been the backbone of the fleet attack duties since the early 1980s.

Greg Shelton provided some naval history by flying an aerobatic routine in his FM-2 Wildcat. The Grumman F4F (and its General Motors license built FM-2 version) was the backbone of the US Navy fighter force at the start of World War II. Although outmatched by the lighter Japanese Zero, it held the line until America’s manufacturing might could provide better designs such as the F6F Hellcat and F4U Corsair.

Veteran warbird aerobatic pilot, Bill Leff, flew his final acro routine at NAS Oceana. He has flown many times at Oceana and his performances will be missed. Although not as glamorous as the fighters from the WWII era, it has been said that if you can master aerobatics in the T-6 Texan, you can fly anything. The T-6 airframe was the advanced trainer for the United States and many of its allies and continued to serve until the late 1950s. The type is widely known as “the pilot maker.”

NAS Oceana was blessed to have two headlining jet teams for the 2018 event. The Canadian Forces Snowbirds made a rare appearance over the skies of Virginia Beach. The team is equally as skilled as the pilots from the American teams such as the Blue Angels and Thunderbirds, but their demonstration is much different. Their jets are trainers and not as powerful as the American Team’s jets. Therefore, the demonstration is more graceful and includes nine aircraft. This allows for larger formations and different variety of formations than the American Teams.

Of note, the team “crop dusted” the Blue Angels over the weekend, as seen in the first picture below. “Crop dusting” is a term of art and is basically the team blowing smoke over the other team. This is a gag between all of the North American teams and is done for humor and inter-team bonding. It is not uncommon for the teams to do so when one team flies over the other while transitioning to a show location or headed to a remote flyover.

Kent Pietsch is an amazing performer. His aircraft, an Interstate Cadet, weighs just 800 pounds and has 90 horsepower. The Cadet is not your typical aerobatic airplane, yet Kent makes it look routine. In fact, the routine is filled with maneuvers that require a high degree of skill and control. The climax may be the landing of the aircraft on top of the RV, which is billed as the world’s smallest aircraft carrier. It usually takes a couple of passes, but Kent is usually very successful in landing the Cadet and subsequently taking off again from the RV. Note below on the right photo that the main gear are not locked into position and the tailwheel is not on the RV on this instance.

The Wounded Warrior Flight team flies two L-39 Albatross jets. The aircraft are former advance trainers from the Soviet Union and are now used to bring awareness to the needs of various veterans across the United States. The jets are flown by two veteran US Navy pilots and perform a “grudge match” aerial dogfight.

This year’s Legacy Flight included the F/A-18F Super Hornet from VFA-106 Gladiators and the F4U Corsair owned by Jim Tobul. An iconic formation considering both aircraft were used by the fleet similarly – both as a fighter and as a multi-role support aircraft. A good comparison of the size of the two aircraft can be seen below. The finale was enjoyable as both aircraft folded their wings simultaneously in front of the crowd.

The 334th brought their commemorative F-15E Strike Eagle for static display. The jet celebrates the 75th Anniversary of the 4th Fighter Wing. The paint scheme was starting to show some wear, but it still looked great, and would have been amazing to see in the air.

The “Blue Blasters” of VFA-34 recently returned from their final cruise in the older “Legacy” model of the F/A-18 Hornet. In April, the squadron recently deployed aboard the aircraft carrier USS Carl Vinson (CVN-70) for a three-month WESTPAC deployment which included a port stop in Vietnam, the first by a US carrier since the war ended. The Blue Blasters returned to sea on August to participate in the multi-national war exercises called “RIMPAC”. VFA-34 is the final Legacy Hornet Strike Fighter Squadron and is scheduled to transition from the Legacy Hornet to the Super Hornet in early 2019.

“That’s it, you’re not going to see a Hornet on an aircraft carrier – at least with U.S. Navy paint on it – ever again.”

The USAF brought a specially painted T-6 Texan II, and the VFA-213 Blacklions squadron car made an appearance. Check out a special article related to squadron cars I recently wrote here.

I had a great time at the 2018 NAS Oceana airshow. It is always amazing to see the fleet aircraft at the East Coast’s Master Jet Base and meet the aircrews. As long as the base continues to have shows, I will do my best to return to see them for years to come. Fly Navy!

The Heritage Flight is always an impressive combination of warbird aircraft and frontline fighters. Here is a formation I do not see often, a P-38 Lightning and F-16 Viper. Image taken at the 2006 Muskegon Air Fair. The P-38 belongs to the Planes of Fame Museum and was flown by Steve Hinton. The F-16 was from the USAF Viper East Demo Team. #p38 #viperdemoteam #heritageflight #warbird #warbirdphotography #avgeek #aviationdaily #ww2aircraft #airshow #airshowphotography #instagramaviation #militaryaviationphotography #warbirdphotography #wherewarbirdsfly
Here is the F4D-1 Skyray (later F-6A) located at the Flying Leatherneck Aviation Museum at MCAS Miramar. The aircraft wears the colors of VMF(AW)-115 Silver Eagles, the first Marine unit to receive the new Skyrays. The Skyray had a short career, but a number of records and firsts as well.
Feeling a little "wild" today! There are a few flying examples of the Wildcat, but this one is special, a FM-2P version. The -2P variant had glass plates on the fuselage to allow it to perform reconnaissance missions. The Texas Flying Legends Museum owned the aircraft at the time this photo was taken in 2016. #warbird #warbirds #aviationlovers #avgeek #ww2 #aviationdaily #warbirdphotography #planedaily #planes #aviationpic #aircraft #ww2aircraft #ww2planes #classicaircraft #aviationphotography #airshow #carrierplanes #flynavy #f4f #grumman
One of my favorite P-51 Mustangs, "Man O War"! @manowarmustang This is a very unique pony. The original Man O War was assigned to Lt. Col Claiborn H Kinnard Jr of the 334th Fighter Squadron, 4th Fighter Group of the 8th Air Force. Now she is part of the Palm Springs Air Museum collection. @psairmuseum #warbird #aviationphotography #ww2planes #warbirdphotography #p51mustang #p51 #avgeek #classicaircraft #airshow #warbirds #instaaviationphotography
I am missing live music, and especially my favorite artist of all time @sammyhagar ! A throwback to 2018 when I was front row and center for the Sammy Hagar concert during the Rock Legends Cruise IV. #5150time #redrocker
The Hawker Hurricane, captured during the 2006 Thunder Over Michigan Airshow. As you can see, even the cloud cover participated in a Battle of Britain theme that year! #warbird #warbirds #aviationlovers #avgeek #ww2 #aviationdaily #warbirdphotography #planedaily