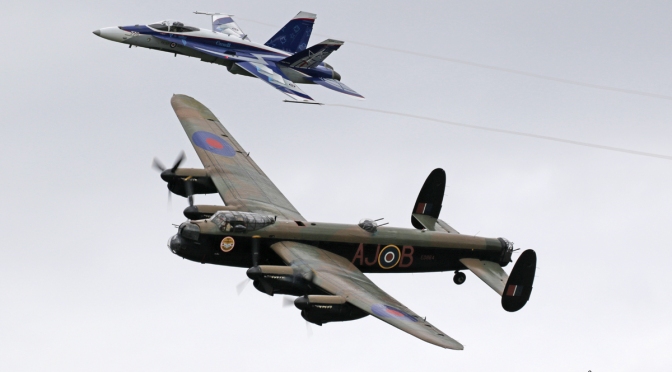 The 2018 Brantford Community Charity Airshow took place on August 29, 2018 at the Brantford Municipal Airport. 2018 had several notable changes, including the name and partnership with the Canadian Warplane Heritage Museum (CWHM).

Mother Nature did not want to cooperate very well, with low ceilings, dark skies and a complete downpour at the climax of the event. Several aircraft were unable to participate due to poor weather conditions allowing a flight to Brantford. However, the bulk of the performers were able to get some of their displays completed.

The CWHM DC-3 opened the event with the Hamilton Sport Parachute Team onboard to bring in the colors. The low ceiling did not allow them to jump, but the aircraft made several nice passes. The aircraft displays the the markings of RCAF No. 435 and 436 Squadrons, which operated in Burma during 1944-45 and whose slogan was “Canucks Unlimited”.

The Strikemaster is a retired light attack aircraft designed by the British and also used by several allied air forces. The design is the armed version of the Provost trainer and first flown in 1967. Danny Richer owns several warbird aircraft including the Strikemaster and a T-28 Trojan, and flies out of the Brantford airport.

The Commemorative Air Force brought their B-29 Superfortress “FiFi” for the only Canadian appearance of the year. FiFi was the lone flying B-29 for a number of years and has been featured in several movies including “The Right Stuff”. The aircraft was rescued from U.S. Navy Proving Ground at China Lake, California and restored to flight. She flew regularly until 2006 when new engines were required. After a long 4-year re-engine project, she returned to flight.

In a very rare formation, the B-29 was joined by the CWHM Lancaster. This formation showcased the USAAF and RAF/RCAF’s two largest bombers of WWII. Although similar in size, the Lancaster could carry a larger payload than the American designed B-29. The CWHM Lancaster is the only flying example in North America and is always exciting to see such a rare piece of military history in the sky. The roar of four Merlin engines is also amazing!

The RCAF CF-18 Hornet demo team brought the noise with a flat show demonstration of the Hornet. This year’s demo jet is painted to in a celebration of the 60th Anniversary of NORAD.

At the conclusion of the CF-18 demo, the rumble of the Lancaster could be heard in the distance. Unknown to the spectators, the team had special plans to perform the Heritage Flight with the Lancaster! We could not believe our eyes as the two aircraft joined together in formation and made the turn towards the showline. Sadly, the weather also decided to turn into a downpour at the same time. The first pass is captured, but the rain forced the camera gear into the bag. Still, it was a special formation and one I will remember for a long time.

The Snowbirds were able to take to the skies to close the show. The heavy rain from earlier passed and the cloud deck began to rise. The team was still required to perform a flat show, but it is equally impressive as the high show. The variation in the sky can be seen in several photos.

A longtime staple of the ground portion of the Brantford show has been Doug Hunt. He stands out in the crowd for obvious reasons, but really brings a fun element to the show. Doug also resides in Brantford and is a multi-talented performer. Details about his other talents and his world record can be found at his performer website.

Doug is always happy to stop and talk to the kids and take photos. It is hard to determine who is having more fun, the kids taking photos with him or Doug himself. I always enjoy seeing him each year and the kids flocking to see him up close.